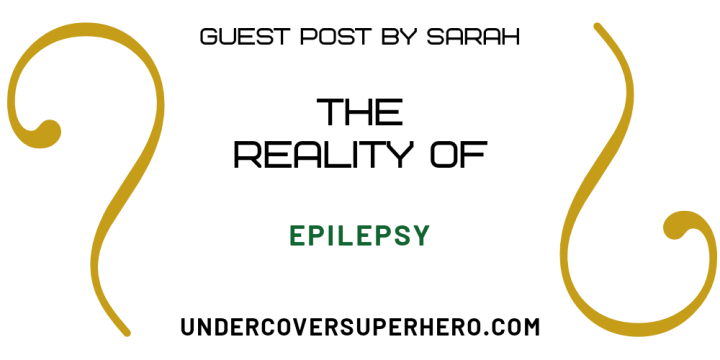 Sarah’s guest post is the 1st post in the segment on my blog, called “The Reality Of…” which gives others the ability to share their story and raise awareness of the disabilities, illnesses, impairments and invisible illnesses that they have.

My name is Sarah, I’m 37, and from the US. I work in physician clinic administration at a hospital, where I have been employed for 18 years. I have a website called Mommin’ in the Real World where I blog about being a mother, my attempts at being an artist, and various other things that come to mind. I have Epilepsy. I was not born with it, nor did I have an accident, a fever, or anything that I know of that caused my condition.

Eleven years ago, when I was 26, one afternoon after work my boyfriend (now husband) and I went to a drive-in restaurant. We ordered our food and were waiting for it to arrive. We were having a conversation and I suddenly heard a loud SHHHHHHHHH sound and ringing in my ears.

I tried to tell my boyfriend that something was wrong with me when I realized that I couldn’t talk. Then my head turned to the right, facing the passenger side window, and my right arm moved up and back, as if I were reaching to scratch my back. I wasn’t controlling either my head or my arm. I was wearing my sunglasses and my boyfriend thought that I was angry or just not answering him- he couldn’t see my face. My body started to convulse and he called 911.

An ambulance came and took me to the Emergency Room at the local hospital. In the ambulance I could hear the paramedic speaking to me, but I couldn’t talk, move, or understand what was going on. Gradually, after reaching the hospital the fog cleared and I was told that I’d had a seizure. I was allowed to go home and was told to follow up with a neurologist, but I had to wait over a month before I could be seen.

A few weeks later my boyfriend and I were at home watching television and the same thing happened. I was sitting on the sofa and my head turned, my arm went back, and I began to convulse again. Then, a couple weeks after that I was napping on the sofa when I had a seizure in my sleep and injured my right shoulder’s rotator cuff.

It was frightening to know that there was something wrong with me and I did not have control of my body. I was told that I could not drive and had to be driven everywhere.

I had some imaging studies done and saw the neurologist who started me on an anti-epileptic medication. I had more seizures and it was difficult to figure out what medication and dosage would keep the seizures under control.

Eventually I had a vagus nerve stimulator (VNS) implanted; it is a pacemaker-like device that gives my vagus nerve electrical shocks at programmed intervals. I also have a strong magnet that can be used to activate the VNS and give me a stronger and longer shock to stop the electrical activity in my brain that is causing a seizure.

I haven’t had a full-on convulsive seizure in several years with my VNS and medication. I do however have seizure auras – a sort of warning before a seizure happens, similar to a migraine aura.

My aura will present in different ways. I feel confused. If I am working at the computer, I may not be able to type or read the words on the screen. If I am having a conversation, I will not understand what the other person is telling me, as if they are speaking another language, or my husband often tells me that I will respond to anything he asks with, “under there!” and get angry when he tells me that I am not making any sense.

I don’t tell a lot of people that I have Epilepsy and of course by looking at me you wouldn’t know it. I know that I have confused several people during conversations on the phone at work, where I either don’t understand what they are telling me or I don’t respond correctly to them.

I made it through several years without an incident at work, but almost a year ago I was in a clinic and visiting with the front office staff when I just kind of went blank, turned and looked at the wall, and didn’t respond to anyone. The nurse practitioner there kindly sat with me while someone called my husband (he also works at the hospital). He took me home, I had a nap, and all was fine- except for my pride.

About two months later the same thing happened while I was in another clinic. This time a nurse’s aide recognized what was happening and fetched a doctor. They took me to the Emergency Room where eventually I came to and realized what had happened. The ER doctor believes that a medication I had started a few days before had triggered the seizure but no one really knows. Now I feel embarrassed when I enter that clinic too.

I was worried for a period that my seizures would keep me from having children, but luckily both the VNS and medication I take is safe for a baby in utero and when breastfeeding. Now that I have children, I worry that one day I will have a seizure in front of them or when driving with them in the car. I am cleared to drive and I do use my magnet each time I drive just to be safe.

I still hate that I have an implant under my skin. I have learned to be cognizant of getting enough sleep, religiously taking my medicine, or watch closely when I am ill, because all of those things can lower the seizure threshold and make it easier for me to potentially have one.

I don’t feel angry or depressed about my diagnosis any longer. I have learned to accept that I will never know why I have Epilepsy.

I have been incredibly blessed to have a husband who has always been by my side the entire time, even the time when my VNS settings were changed and made me snore horribly loud and keep him awake each night! (The vagus nerve also affects the voice box so the change in my settings caused stridor, a wheezy sounding high-pitched noise while I was sleeping.) He is patient, kind, has helped me so much. I don’t know how I could have made it this far without him.

The whole experience has made me feel kinder and less judgemental towards other people. You never know what another person is going through in their journey through life. Someone could be the perfect image of serenity on the outside but falling apart inside due to a struggling marriage.

Someone who is acting rude and impolite may have just received bad news. Someone could outwardly be the perfect picture of health but be very ill. Some people have illnesses or conditions that you can see, others have physical, mental, or emotional ones that you can’t see. I think it is important to see the person, not the diagnosis.

My favorite superhero is Wonder Woman. I used to watch the TV show as a child and have loved her ever since.

I think she is a feminist icon and embodies so many positive qualities: inner strength, a belief in doing what is right and helping others, a strong will, compassion, a steady moral compass, and empathy.

Thank you Sarah for sharing your story with my readers and me!

29 thoughts on “The Reality of Epilepsy – Guest Post by Sarah”